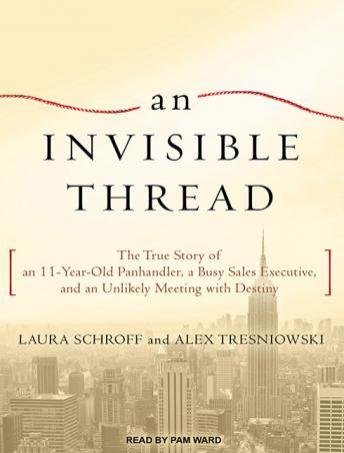 An Invisible Thread: The True Story of an 11-Year-Old Panhandler, a Busy Sales Executive, and an Unlikely Meeting with Destiny

In the tradition of the New York Times bestseller The Blind Side, The Invisible Thread tells of the unlikely friendship between a busy executive and a disadvantage young boy, and how both of their lives changed forever.

When Laura Schroff brushed by a young panhandler on a New York City corner one rainy afternoon, something made her stop and turn back. She took the boy to lunch at the McDonald's across the street that day. And she continued to go back, again and again for the next four years until both of their lives had changed dramatically. Nearly thirty years later, that young boy Maurice has gotten married and has his own children. Now he works to change the lives of disadvantaged kids, just like the boy he used to be.

An Invisible Thread is the true story of the bond between a harried sales executive and an eleven-year-old boy who seemed destined for a life of poverty. It is the heartwarming story of a friendship that has spanned three decades and brought meaning to an over-scheduled professional and hope to a hungry and desperate boy living on the streets.

An Invisible Thread: The True Story of an 11-Year-Old Panhandler, a Busy Sales Executive, and an Unlikely Meeting with Destiny