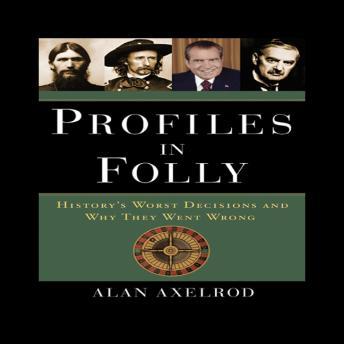 Profiles in Folly: History's Worst Decisions and Why They Went Wrong

Using the same engrossing anecdotal format that has proved so popular in Profiles in Audacity, Alan Axelrod now turns to the dark side of audacious decision-making: those choices that, in retrospect, were shockingly wrongheaded.

Although Axelrod investigates some dumb decisions by stupid people and some evil decisions by evil people, the overwhelming majority of these decisions were made by good, smart people whose poor judgment produced disastrous, often irreversible results.

The 35 compelling and often poignant stories, which range from ancient times to today, include: The Trojan Horse; the Children's Crusade; the sailing of the Titanic, and the false belief that it just couldn't sink; Edward Bernays's 1929 campaign to recruit women smokers; Neville Chamberlain's appeasement of the Nazis; Ken Lay's deception with Enron; and even the choice to create a "New Coke" and fix what wasn't broke.

As with Profiles in Audacity, the deftly drawn vignettes will pique interest, satisfy curiosity, give pleasure, and present valuable lessons. And in addition to offering the same insightful analysis of the decision-making process, Folly also includes objective post-mortems that explain what went wrong and why. These are cautionary tales-albeit with exquisite twists ranging from acerbic to horrific.

Profiles in Folly: History's Worst Decisions and Why They Went Wrong