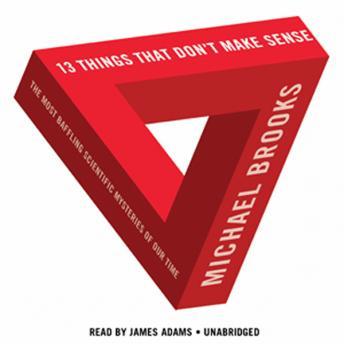 13 Things That Don't Make Sense: The Most Baffling Scientific Mysteries of Our Time

Science starts to get interesting when things don’t make sense.

Science’s best-kept secret is this: even today, there are experimental results and reliable data that the most brilliant scientists can neither explain nor dismiss. In the past, similar “anomalies” have revolutionized our world, like in the sixteenth century, when a set of celestial anomalies led Copernicus to realize that the earth goes around the sun and not the reverse, and in the 1770s, when two chemists discovered oxygen because of experimental results that defied all the theories of the day. So if history is any precedent, we should look to today’s inexplicable results to forecast the future of science.

In 13 Things That Don’t Make Sense, Michael Brooks heads to the scientific frontier to meet thirteen modern-day anomalies and discover tomorrow’s breakthroughs. Why are some NASA satellites speeding up as they get farther from the sun? Why has the placebo effect become a pillar of modern medicine when doctors can’t agree whether it even exists? Is ninety-six percent of the universe missing? Is a 1977 signal from outer space a transmission from an alien civilization? Might giant viruses explain how life began? Taking readers on an entertaining tour d’horizon of the strangest of scientific findings—involving everything from our lack of free will to Martian methane that offers new evidence of life on the planet—Michael Brooks argues that the things we don’t understand are the key to what we are about to discover. Spanning disciplines from biology to cosmology, chemistry to psychology to physics, Brooks thrillingly captures the excitement, messiness, and controversy of the battle over where science is headed.

13 Things That Don't Make Sense: The Most Baffling Scientific Mysteries of Our Time