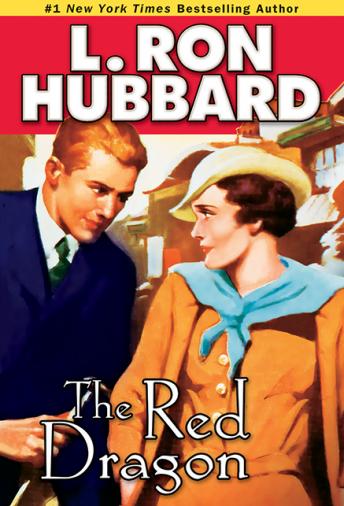 As a lieutenant in the US Marine Corps-as handsome and cocky as Richard Gere-Michael Stuart was once considered an officer and a gentleman. But that's all changed. Now he's seen as a renegade, a traitor and a thief.

Stuart is a man without a country . . . and perhaps without a prayer. Why? Because in a daring plot to foil the Japanese puppet regime in China, he set out to reinstate the country's true emperor. Known now as The Red Dragon, Stuart is a soldier of fortune in war-torn Manchuria-and a man of honor in a world of treachery.

Stuart's latest adventure takes him from Peking to the Great Wall and beyond. He's in a race against time and against the Japanese super-spy known as the Hell-Cat, both of them in hot pursuit of an elusive black chest. For Stuart, the ultimate prize is one filled with mystery, power, and treasure-not only in the chest itself, but in the love of the beautiful woman who has sent him on this mission. . . .

It was on Hubbard's second journey to East Asia that he met British Secret Service agent, Major Ian MacBean, who introduced him to "The Great Game," the geopolitical tug-of-war between China, Japan, and Britain. Hubbard also learned of the trade in stolen Chinese treasures, and was exposed to the secret criminal society known as The Red Dragon-inspiring this story of the same name. He has captured a singular time in this storied land.

"Hubbard delivers a tidy finale that shows why he was one of the most popular genre writers of his generation."

This title is due for release on May 17, 2013
We'll send you an email as soon as it is available!