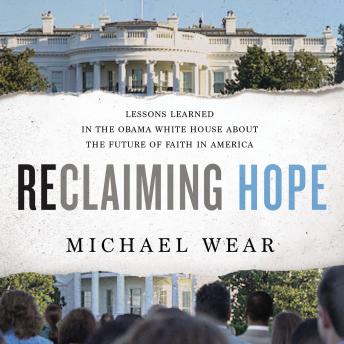 Reclaiming Hope: Lessons Learned in the Obama White House About the Future of Faith in America

'An important and extremely timely book...Get it, read it, and talk to others about it.' --Timothy Keller, author of Reason for God

'A warm, engaging read of the author’s experience with faith, politics, and the intersection (and sometimes collision) of the two. Reclaiming Hope is an important contribution in this age of religious and political polarization.' --J.D. Vance, author of Hillbilly Elegy

Before he had turned twenty-one, Michael Wear found himself deep inside the halls of power in the Obama administration as one of the youngest-ever White House staffers. Appointed by the president in 2008 to the Office of Faith-based and Neighborhood Partnerships and later directing faith outreach for the president’s 2012 re-election campaign, Wear threw himself wholeheartedly into transforming hope into change, experiencing first-hand the highs and lows of working as a Christian in government.

In this unvarnished account of faith inside the world’s most powerful office, Wear gives unprecedented insight into the most controversial stories of the last eight years, from the president’s change of position on gay marriage and the politicization of religious freedom to the administration’s failure to find common ground on abortion and the bitter controversy over who would give the benediction at the 2012 inauguration. Wear also reveals the behind-the-scenes struggles behind some of the administration’s signature achievements, including the adoption tax credit and making human trafficking a presidential priority. And he offers a rare window onto the ways the president himself viewed the role of faith in politics.

More than a memoir of the Obama administration, Reclaiming Hope is also a passionate call for faith in the public square, particularly for Christians to see politics as a means of loving one’s neighbor and of pursuing justice for all while promoting racial reconciliation and fighting for religious freedom for people of all faiths. At a time when large numbers of thoughtful Christians are arguing for withdrawal from participation in public institutions, Wear’s experience at the white-hot center of civic life shows how and why Christians must be involved in every aspect of cultural life—even if failures seem to outnumber successes—while working on behalf of the nation’s common good.

Reclaiming Hope: Lessons Learned in the Obama White House About the Future of Faith in America