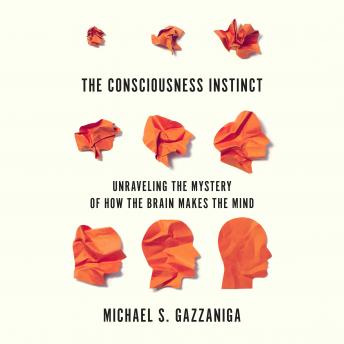 The Consciousness Instinct: Unraveling the Mystery of How the Brain Makes the Mind

“The father of cognitive neuroscience” illuminates the past, present, and future of the mind-brain problem
How do neurons turn into minds? How does physical “stuff”―atoms, molecules, chemicals, and cells―create the vivid and various worlds inside our heads? The problem of consciousness has gnawed at us for millennia. In the last century there have been massive breakthroughs that have rewritten the science of the brain, and yet the puzzles faced by the ancient Greeks are still present. In The Consciousness Instinct, the neuroscience pioneer Michael S. Gazzaniga puts the latest research in conversation with the history of human thinking about the mind, giving a big-picture view of what science has revealed about consciousness.
The idea of the brain as a machine, first proposed centuries ago, has led to assumptions about the relationship between mind and brain that dog scientists and philosophers to this day. Gazzaniga asserts that this model has it backward―brains make machines, but they cannot be reduced to one. New research suggests the brain is actually a confederation of independent modules working together. Understanding how consciousness could emanate from such an organization will help define the future of brain science and artificial intelligence, and close the gap between brain and mind.
Captivating and accessible, with insights drawn from a lifetime at the forefront of the field, The Consciousness Instinct sets the course for the neuroscience of tomorrow.

Consciousness Instinct: Unraveling the Mystery of How the Brain Makes the Mind