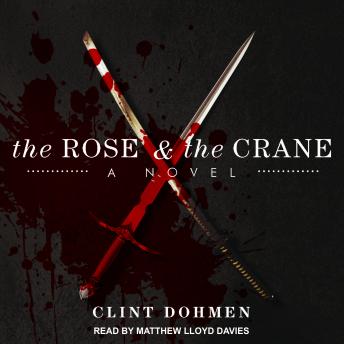 The Rose and the Crane

With elements smacking of Monty Python and The Princess Bride, The Rose and the Crane is a historical adventure that brings knight and samurai together for a ribald road trip across the medieval world.

The year? 1483. The place? China-adjacent. If you had told young Simon Lang that he'd spend his best years piloting a boat for a trumped-up Venetian, instead of enjoying the good life back home in Exeter, he'd have laughed in your face. But King Edward IV did not like that Simon was thrice removed from some long forgotten ancestor who was somehow related to the owner of the cow that gave milk to King Henry V. Or something like that, Simon was not very good at genealogy. But now the Lancastrian lordling has fled to the far reaches of the world to brood on revenge.

He's stranded in these strange waters with money-hungry Captain Aldo Mitacchione, his halfwit first mate Neno, and a crew of starving Italians. But if the strange vessel on the horizon or the unexpected ally on board have anything to say about it, things are about to get stranger.

Join smart-talking Simon, fabled samurai Kojiro Takeda, and their band of misfit brothers as they outrun cannibals, outsmart assassins, (attempt to) outdrink Scotsmen, and help Henry Tudor oust the crown from the sociopathic Duke of Gloucester.

Rose and the Crane