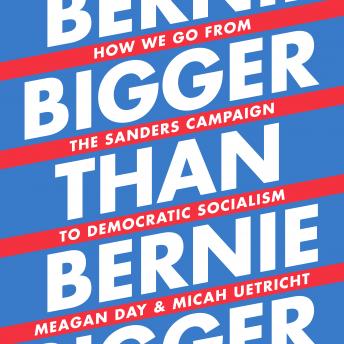 Bigger Than Bernie: How We Go from the Sanders Campaign to Democratic Socialism

Bernie Sanders's 2016 candidacy expanded the scope of political possibility in the United States, putting socialism and class politics back on the map. His radical campaign-not just for the Democratic presidential candidacy but against 'the billionaire class'-helped catalyze other transformative left-wing politicians like Alexandria Ocasio-Cortez to seek and win office, just as he inspired teachers from West Virginia to Los Angeles to win hard-fought, historic strike campaigns. Sanders has, in short, helped cohere a new movement in American politics.

But even when coverage of Sanders takes stock of the sea change he has affected in American politics, it all too often fails to grasp what's unique about his approach. The senior senator from Vermont has demanded new policies and political approaches in this country-though he has also hinted at more, calling repeatedly for a 'political revolution,' something that he says would involve 'millions of Americans' getting involved in politics not just at the ballot box, but in their workplaces and neighborhoods, too.

In this book, Micah Uetricht and Meagan Day go beyond a simple balance sheet of Democratic Party politics. In a clear and effective style, they detail what we need to do to get beyond the Sanders campaign or presidency to transform the US from top to bottom.

Bigger Than Bernie: How We Go from the Sanders Campaign to Democratic Socialism