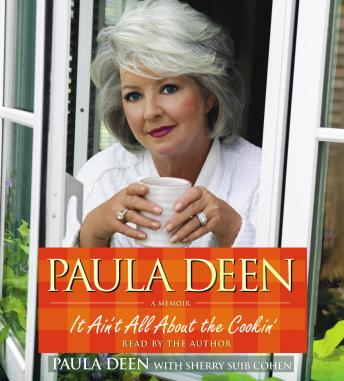 Paula Deen: It Ain't All About the Cookin'

• Fans love Paula Deen: Paula Deen: It Ain’t About the Cookin’ spent over 3 months on the New York Times bestseller list: there are over 500,000 hardcovers in print..

• A superstar author: Paula Deen is an American icon. She is one of the most popular hosts on the Food Network and with more than 6 million books in print, an expanding restaurant empire, her own line of furniture, cookware, and tableware, Paula’s fame and retail power will only continue to grow..

• Rags-to-riches, the real Paula Deen: Starting with only $200 and plenty of faith and courage, Paula achieved success beyond her wildest dreams. She speaks to readers as frankly about her struggles along the way, including her difficult first marriage and her battle with agoraphobia. .

• Fairy tale marriage: Paula gives all the details on the romance with tugboat captain Michael Groover that ?captured the hearts of fans across the country. .

who knew that Paula D had such a past? Im shocked by her history, and the hardships she endured getting where she got. Who knew she got where she is with pure determination and not via a silver spoon... and most amusingly- Go Paula for getting your affairs out of the way, before going famous. Im happy for her that so far her 2nd hubby is way better than the last. Who knew her boys, were mama's boys?... Almost like hte cord has not yet been cut... I guess their family is just really really tight. Lastly, Im so happy that she narrated it herself. Im tickled by the way she says Al-bee-nee georgia, and whats up with the "a" between ya'll and ham... must be a georgia thing. It was good to hear about her visit with President Jimmy Carter.

I'd only seen Paula Deans' show once, didn't care for her personality, so never watched her show again, but several friends of mine love her, so I rented this so we could listen to her story. UNREAL! So, now I'm going to watch her show and appreciate her because of what all she has been through and overcame.