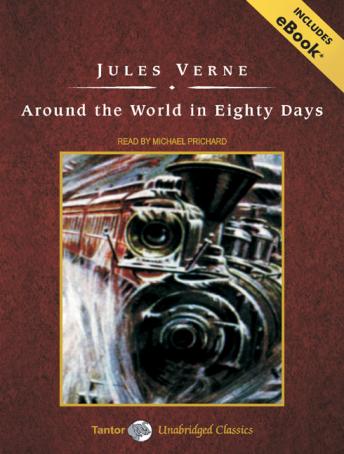 A fastidious English gentleman makes a remarkable wager: He will travel around the world in eighty days or forfeit his life's savings. Thus begins Jules Verne's classic novel-one that remains unsurpassed in sheer storytelling entertainment and pure adventure.

Phileas Fogg and his faithful manservant, Jean Passepartout, embark on a fantastic journey into a world filled with danger and beauty-from the exotic shores of India, where the heroic travelers rescue the beautiful wife of a rajah from ritual sacrifice, to the rugged American frontier, where their train is ambushed by an angry Sioux tribe. Fogg's mission is complicated by an incredible case of mistaken identity that sends a Scotland Yard detective in hot pursuit.

At once a riveting race against time and an action-packed odyssey into the unknown, Around the World in Eighty Days is a masterpiece of adventure fiction that has captured the imagination of generations of readers and continues to enthrall us today.

This title is due for release on January 26, 2009
We'll send you an email as soon as it is available!