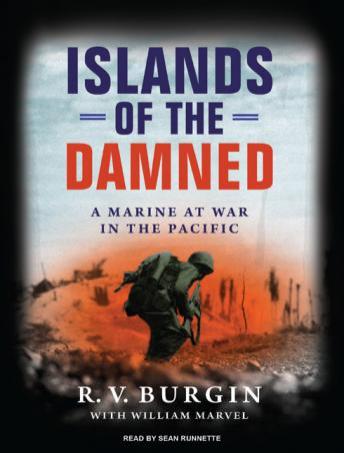 Islands of the Damned: A Marine at War in the Pacific

This is an eyewitness-and eye-opening-account of some of the most savage and brutal fighting in the war against Japan, told from the perspective of a young Texan who volunteered for the Marine Corps to escape a life as a traveling salesman. R. V. Burgin enlisted at the age of twenty and, with his sharp intelligence and earnest work ethic, climbed the ranks from a green private to a seasoned sergeant. Along the way, he shouldered a rifle as a member of a mortar squad. He saw friends die and enemies killed. He saw scenes he wanted to forget but never did-from enemy snipers who tied themselves to branches in the highest trees, to ambushes along narrow jungle trails, to the abandoned corpses of hara kiri victims, to the final howling banzai attacks as the Japanese embraced their inevitable defeat.

An unforgettable narrative of a young Marine in combat, Islands of the Damned brings to life the hell that was the Pacific War.

Islands of the Damned: A Marine at War in the Pacific