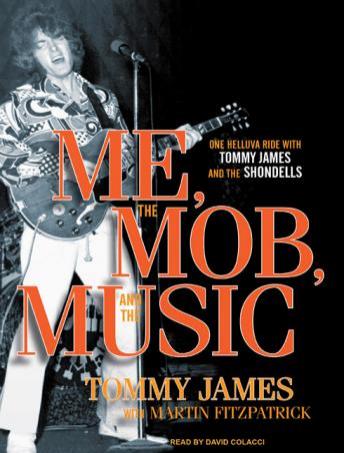 Me, the Mob, and the Music: One Helluva Ride with Tommy James and the Shondells

Everyone knows the hits: 'Mony Mony,' 'I Think We're Alone Now,' 'Crimson and Clover,' 'Crystal Blue Persuasion.' They are nuggets of rock and pop history. However, few know the unlikely story of how these hits came to be. Tommy James had been performing in rock bands in the Michigan area since the age of twelve. Prompted to record a few songs by a local disc jockey in 1964, Tommy chose an obscurity titled 'Hanky Panky,' which became a minor local hit that came and went.

Then, in 1966, the record was rediscovered by a Pittsburgh DJ who started playing it on heavy rotation, prompting a tremendous response. Soon every record mogul in New York was pursuing Tommy and the band. Then an even odder thing happened: every offer except one disappeared, and Tommy found himself in the office of Morris Levy at Roulette Records, where he was handed a pen and ominously promised 'one helluva ride.' Morris Levy, the legendary 'godfather' of the music business, needed a hit, and 'Hanky Panky' would be his. The song went to number one; Tommy went on to do much more; and Levy continued to reign.

Me, the Mob, and the Music tells the intimate story of the complex and sometimes terrifying relationship between the bright-eyed, sweet-faced blonde musician from the heartland and the big, bombastic, brutal bully from the Bronx, who hustled, cheated, and swindled his way to the top of the music industry. It is also the story of this swaggering, wildly creative era of rock 'n' roll-when the hits kept coming and payola and the strong arm tactics of the mob were the norm-and what it was like, for better or worse, to be in the middle of it.

Me, the Mob, and the Music: One Helluva Ride with Tommy James and the Shondells