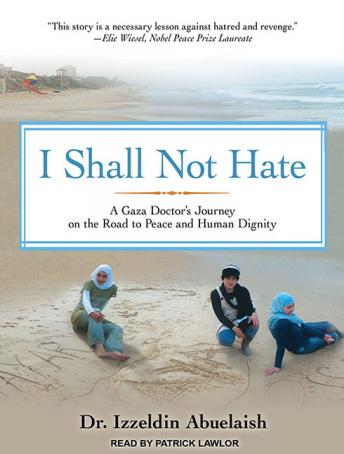 I Shall Not Hate: A Gaza Doctor's Journey on the Road to Peace and Human Dignity

Dr. Izzeldin Abuelaish-now known simply as the 'Gaza doctor'-captured hearts and headlines around the world in the aftermath of horrific tragedy: On January 16, 2009, Israeli shells hit his home in the Gaza Strip, killing three of his daughters and his niece.

By turns inspiring and heartbreaking, hopeful and horrifying, I Shall Not Hate is Abuelaish's account of an extraordinary life. A Palestinian doctor with a degree from Harvard who was born and raised in a refugee camp in the Gaza Strip and 'who has devoted his life to medicine and reconciliation between Israelis and Palestinians' (The New York Times), Abuelaish has been crossing the lines in the sand that divide Israelis and Palestinians for most of his life-as a physician who treats patients on both sides of the line; as a humanitarian who sees the need for improved health and education for women as the way forward in the Middle East; and, most recently, as the father whose daughters were killed by Israeli soldiers. His response to this tragedy made news and won him humanitarian awards around the world. Instead of seeking revenge or sinking into hatred, Abuelaish called for the people in the region to start talking to each other. His deepest hope is that his daughters will be 'the last sacrifice on the road to peace between Palestinians and Israelis.'

I Shall Not Hate: A Gaza Doctor's Journey on the Road to Peace and Human Dignity

This title is due for release on January 19, 2011
We'll send you an email as soon as it is available!