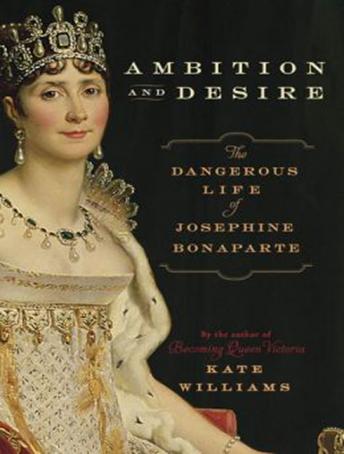 Ambition and Desire: The Dangerous Life of Josephine Bonaparte

Josephine de Beauharnais began as a kept woman of Paris and became the most powerful woman in France. She was no beauty, her teeth were rotten, and she was six years older than her husband, but one twitch of her skirt could bring running the man who terrorized Europe.

The tale of Napoleon and Josephine is one of the most famous love stories in the world. With Josephine, Napoleon became the greatest man in Europe, the Supreme Emperor. And yet, envisioning Josephine as the calm consort on the sofa obscures many of the most fascinating aspects of her story. How did she rise to such an astonishing position? How did she perfect the art of the beautiful, sweet chameleon-and thus fool so many? France in the late eighteenth and early nineteenth century was a country in such extreme flux that everything was accessible-and possible-but it took an incredible woman to seize the opportunities. Ambition and Desire shows how the little girl from Martinique became the Queen of France.

Ambition and Desire: The Dangerous Life of Josephine Bonaparte