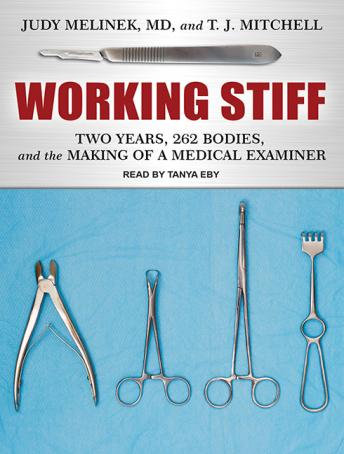 Working Stiff: Two Years, 262 Bodies, and the Making of a Medical Examiner

Just two months before the September 11 terrorist attacks, Dr. Judy Melinek began her training as a New York City forensic pathologist. With her husband and their toddler holding down the home front, Judy threw herself into the fascinating world of death investigation-performing autopsies, investigating death scenes, and counseling grieving relatives. Working Stiff chronicles Judy's two years of training, taking listeners behind the police tape of some of the most harrowing deaths in the Big Apple.


Lively, action-packed, and loaded with mordant wit, Working Stiff offers a firsthand account of daily life in one of America's most arduous professions. The body never lies-and through the murders, accidents, and suicides that land on her table, Dr. Melinek lays bare the truth behind the glamorized depictions of autopsy work to reveal the secret story of the real morgue.

Working Stiff: Two Years, 262 Bodies, and the Making of a Medical Examiner