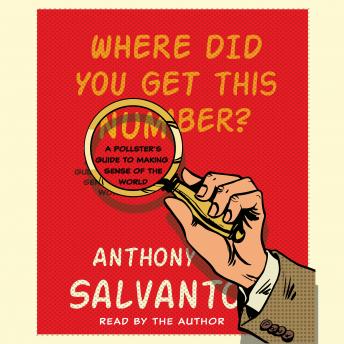 Where Did You Get This Number?: A Pollster's Guide to Making Sense of the World

CBS News’ Elections and Surveys Director Anthony Salvanto takes you behind the scenes of polling to show you how to think about who we are and where we’re headed as a nation.

As Elections and Surveys Director for CBS News, it’s Anthony Salvanto’s job to understand you—what you think and how you vote. He’s the person behind so many of the poll numbers you see today, making the winner calls on election nights and surveying thousands of Americans. In Where Did You Get This Number? A Pollster’s Guide to Making Sense of the World, Salvanto takes readers on a fast-paced, eye-opening tour through the world of polling and elections and what they really show about America today, beyond the who's-up-who’s-down headlines and horse races. Salvanto is just the person to bring much-needed clarity in a time when divisions seem to run so deep.

The language of polling may be numbers, but the stories it tells are about people. In this engaging insider’s account, Salvanto demystifies jargon with plain language and answers readers’ biggest questions about polling and pollsters. How can they talk to 1,000 people and know the country? How do they know the winner so fast? How do they decide what questions to ask? Why didn't they call you? Salvanto offers data-driven perspective on how Americans see the biggest issues of our time, from the surprising 2016 election, to the shocks of the financial crisis, the response to terrorism and the backlash against big money. He doesn’t shy away from pointing out what’s worked and what hasn’t. Salvanto takes readers inside the CBS newsroom on Election Night 2016 and makes readers rethink conventional wisdom and punditry just in time for the 2018 midterms. He shows who really decides elections and why you should think about a poll differently from the forecasts popularized by Nate Silver and others.

Where Did You Get This Number? is an essential resource for anyone interested in politics—and how to better measure and understand patterns of human behavior. For any American who wants to get a better read on what America is thinking, this book shows you how to make sense of it all.