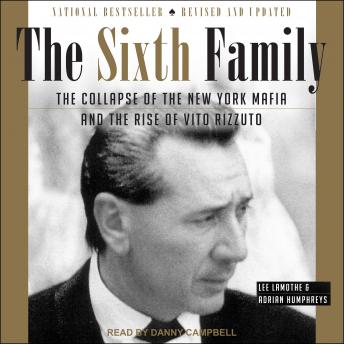 The Sixth Family: The Collapse of The New York Mafia and The Rise of Vito Rizzuto

The definitive book about the explosive Rizzuto crime family

On May 5, 1981, three rebellious members of New York's Bonanno crime family were gunned down in a Brooklyn social club. One of the gunmen was Vito Rizzuto, a man who would rise to the top of the underworld in Canada and then expand his reign across continents to become a global superboss.

The Sixth Family, now revised and updated, reveals the hidden history of the rise of the Rizzuto clan, the alliances it forged around the world, and the bloody events that led to charges against Vito Rizzuto in the United States and Italy for racketeering and corruption. As police in the United States, Italy, and Canada meticulously pieced together the puzzle that is Vito Rizzuto, established notions about the nature of authority within the Mafia were called into question. Who was this so-called 'John Gotti of Canada'? How did he become one of the biggest names in global crime? And how did he survive the deadly assault from gangland rivals that almost destroyed his family?

Sixth Family: The Collapse of The New York Mafia and The Rise of Vito Rizzuto