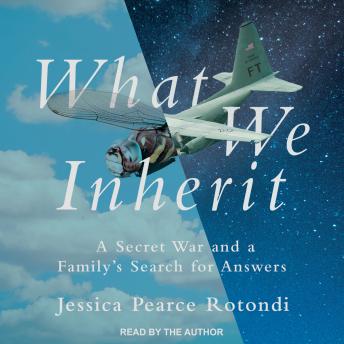 What We Inherit: A Secret War and a Family's Search for Answers

In the wake of her mother's death, Jessica Pearce Rotondi uncovers boxes of letters, declassified CIA reports, and newspaper clippings that bring to light a family ghost: her uncle Jack, who disappeared during the CIA-led 'Secret War' in Laos in 1972. The letters lead her across Southeast Asia in search of the truth that has eluded her family for decades.

On the night of March 29, 1972, Jack's plane vanishes over the mountains bordering Vietnam. The crash eerily echoes the one Jack's father, Ed Pearce, survived over Germany in World War II, when Ed parachuted out of a burning plane before being captured and sent to Stalag 17 prison camp.

Years later, Ed will become convinced that his son is still alive and that the US government he fought for is lying to him. What We Inherit is Rotondi's story of her own hunt for answers as she retraces her grandfather's journey to Laos in search of his son.

An excavation of intergenerational trauma on a personal and national scale, What We Inherit reveals the power of a father's refusal to be silenced and a daughter's quest to rediscover her voice in the wake of loss.

What We Inherit: A Secret War and a Family's Search for Answers