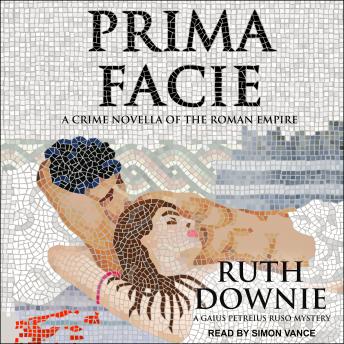 Prima Facie: A Crime Novella of the Roman Empire

A novella from the author of the bestseller Medicus, featuring reluctant investigator Ruso and his partner Tilla. A tale of murder, intrigue, and betrayal in Roman Gaul.

It's AD 123 and the sun is shining on southern Gaul. Ex-military medic Ruso and his British wife Tilla are back after a long absence-but it's not the reunion anyone had hoped for.

Ruso's brother has left him in charge of a farm he has no idea how to manage, a chronic debt problem and a gaggle of accident-prone small children. Meanwhile his sister Flora has run away to rescue her boyfriend, who's accused of murdering a wealthy guest at a party.

Can Ruso and Tilla save the boyfriend from the murder charge-or should they be saving Flora from the boyfriend? Will any of the guests tell the truth about the fatal party before it's too late? And meanwhile, how long can Ruso continue to lie about what's inside the bath house?

Prima Facie: A Crime Novella of the Roman Empire