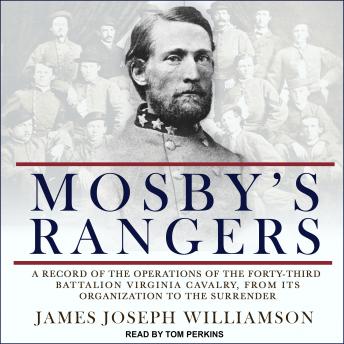 Mosby's Rangers: A Record Of The Operations Of The Forty-Third Battalion Virginia Cavalry, From Its Organization To The Surrender

Mosby's Rangers were some of the most feared Confederate troops of the American Civil War. Under the command of Col. John S. Mosby, they executed small raids behind Union lines, raiding at will and then vanishing quickly into the countryside to remain undetected. Formally known as the 43rd Battalion, Virginia Cavalry, they were formed after the Partisan Ranger Act of 1862. By the summer of 1864 Mosby had around four hundred men at his disposal in six cavalry companies and one artillery company. Their success led to the area around Fauquier and Loudoun counties becoming known as 'Mosby's Confederacy,' due to the grip that he and his men held on the area.

James Joseph Williamson was a private who fought under Mosby from April, 1863, through until the end of the war. He records in fascinating detail the activity of Mosby and his men from their companies' organization until the moment that they were disbanded. Williamson provides brilliant insight into the campaigns that Mosby's men fought, how they were organized, who led them, and the difficulties they faced, as well as their greatest victories.

The effectiveness of Mosby and his small band can be seen in these two statements: General Lee said that Mosby was 'zealous, bold, and skillful, and with very small resources he has accomplished a great deal.' While on the Union side, 'General at one point reported that seventeen thousand of his men were engaged in keeping Mosby from attacking his weak points, and thus away from active service on the firing line. Finally it was not safe to send despatches by a courier unless a regiment was sent along to guard him.'

Yet, after the war, Grant held no animosity against his former foe, and stated 'I have come to know Mosby personally and somewhat intimately. He is a different man entirely from what I supposed. He is able and thoroughly honest and truthful. There were probably but few men in the South who could have commanded successfully a separate detachment in the rear of an opposing army, and so near the borders of hostilities as long as he did without losing his entire command.' Thus demonstrating the respect that Mosby and his men engendered with their enemies even after the war.

Mosby's Rangers is a perfect book for anyone interested in the partisan activities of Mosby and his men through the course of the American Civil War.

Mosby's Rangers: A Record Of The Operations Of The Forty-Third Battalion Virginia Cavalry, From Its Organization To The Surrender