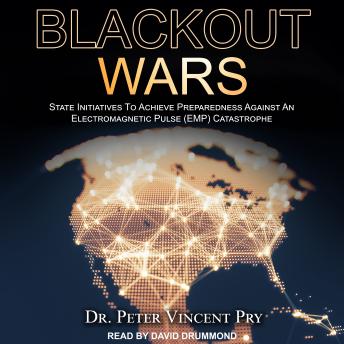 Blackout Wars is about the historically unprecedented threat to our electronic civilization from its dependence on the electric power grid. Most Americans have experienced temporary blackouts, and regard them as merely an inconvenience. Some Americans have experienced more protracted local and regional blackouts, as in the aftermaths of Hurricanes Sandy and Katrina, and may be better able to imagine the consequences of a nationwide blackout lasting months or years, that plunges the entire United States into the dark.

In such a nightmare blackout, the entire population of the United States could be at risk. There would be no food. No water. Communications, transportation, industry, business, and finance-all of the critical infrastructures that support modern civilization and the lives of the American people would be paralyzed by collapse of the electric power grid.

How could a catastrophic blackout happen? Threats to the electric power grid are posed by cyber attack, sabotage, a geomagnetic super-storm, and electromagnetic pulse (EMP) from the high-altitude detonation of a nuclear weapon.

Blackout Wars warns that terrorists and rogue states are developing a revolutionary new military strategy that could exploit all of these threats in combination, including exploiting the opportunity of severe weather or a geo-storm, to collapse the national electric grid and all the critical infrastructures. It would be the fall of American civilization.

For the first time in history, the most dysfunctional societies, like North Korea that cannot even feed its own people, or even non-state actors like terrorists, could destroy the most successful societies on Earth-by means of a Blackout War. Attacking the electric grid enables an adversary to strike at the technological and societal Achilles Heel of U.S. military and economic power.

Blackout Wars likens this new Revolution in Military Affairs to Nazi Germany's Blitzkrieg strategy, secretly developed and tested in low-profile experiments during the 1930s, sprung upon the Allies in 1939-1941 in a series of surprise attacks that nearly enabled the Third Reich to win World War II. Just as the West was asleep to the threat from the Blitzkrieg, so today U.S. and Western elites are blind to the looming threat from a Blackout War.