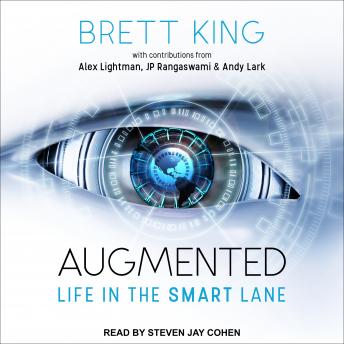 Augmented: Life in The Smart Lane

The Internet and smartphone are just the latest in a 250-year-long cycle of disruption that has continuously changed the way we live, the way we work, and the way we interact. The coming Augmented Age, however, promises a level of disruption, behavioral shifts, and changes that are unparalleled. While consumers today are camping outside of an Apple store waiting to be one of the first to score a new Apple Watch or iPhone, the next generation of wearables will be able to predict if we're likely to have a heart attack and recommend a course of action. We watch news of Google's self-driving cars, but don't likely realize this means progressive cities will have to ban human drives in the next decade because us humans are too risky.

Following on from the Industrial or Machine Age, the Space Age and the Digital Age, the Augmented Age will be based on four key disruptive themes-Artificial Intelligence, Experience Design, Smart Infrastructure, and HealthTech. Historically the previous 'ages' bought significant disruption and changes, but on a net basis jobs were created, wealth was enhanced, and the health and security of society improved. What will the Augmented Age bring? Will robots take our jobs, and AI's subsume us as inferior intelligences, or will this usher in a new age of abundance?

Augmented is a book on future history, but more than that, it is a story about how you will live your life in a world that will change more in the next twenty years than it has in the last 250 years. Are you ready to adapt? Because if history proves anything, you don't have much of a choice.

Augmented: Life in The Smart Lane