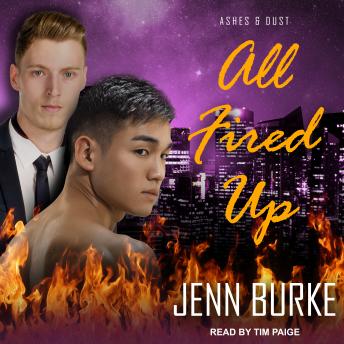 Don't miss this riveting and romantic spin-off series from Jenn Burke, author of Not Dead Yet.

Paranormals are dying. All over the city, with no explanation and only one thing in common: their magic is missing.

Vampire and private investigator Evan Fournier isn't supposed to be taking on paranormal cases, but when the murderer hits close to home, he agrees to look into it. The last thing he expects is to become a target himself-and then to become irrevocably bonded to the man who just tried to kill him.

With his memory gone and his soul bonded to a stranger, former firefighter Colin Zhang wants to be anywhere else. He doesn't have a damn clue why he just tried to kill Evan, and he didn't even know about magic until just now. The sooner he can get back to his real life, the better. But every time either of them tries to leave, pure agony stops them short.

Forced to work with Evan or suffer the consequences, Colin must excavate the secrets buried in his missing memories while battling two rising threats: the conspiracy behind the murder, and his mutual attraction to the bond mate he never wanted.