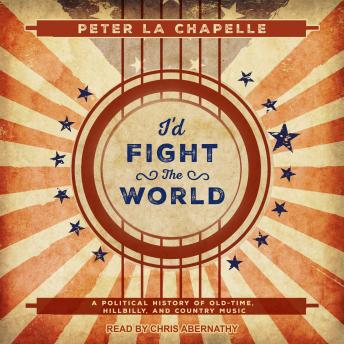 I'd Fight the World: A Political History of Old-Time, Hillbilly, and Country Music

Long before the United States had presidents from the world of movies and reality TV, we had scores of politicians with connections to country music. In I'd Fight the World, Peter La Chapelle traces the deep bonds between country music and politics, from the nineteenth-century rise of fiddler-politicians to more recent figures like Pappy O'Daniel, Roy Acuff, and Rob Quist. These performers and politicians both rode and resisted cultural waves: some advocated for the poor and dispossessed, and others voiced religious and racial anger, but they all walked the line between exploiting their celebrity and righteously taking on the world. La Chapelle vividly shows how country music campaigners have profoundly influenced the American political landscape.

I'd Fight the World: A Political History of Old-Time, Hillbilly, and Country Music