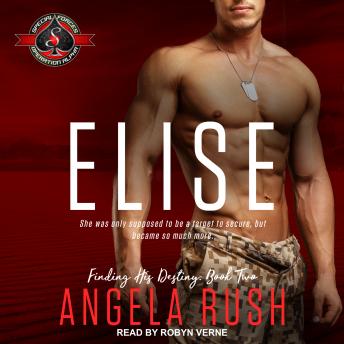 Elise Sommers has lived a very sheltered life. She developed Leukemia when she was a teenager and managed to beat the odds not once, but twice. However, despite her recovery, her parents were never able to let go of their fear of losing their daughter. Now at the age of twenty-seven, Elise decides it's past time to venture out on her own. She joins the Red Cross to provide aide to the refugees fleeing Syria as the conflict between ISIS and the US worsens.

Warren 'Deadeye' Vickers is a forty-two-year-old Marine Special Ops soldier. He dedicated himself to his work and being a professional. When his closest friend, Hawk moved up to the headquarters division of their special ops team, Deadeye was moved to be the leader of the team in the field. He took his job very seriously.

When Elise is taken from the refugee camp, Deadeye's team is called in to bring her home. From the moment he sees her picture during the briefing for the mission, Deadeye feels a connection to the beautiful young woman and a need to care and protect her. She was supposed to be a target, a mission, but when he takes her in his arms she becomes so much more. He knows she is his Destiny.