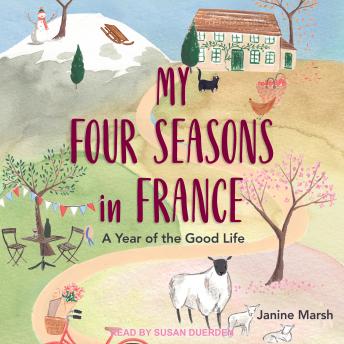 My Four Seasons in France: A Year Of The Good Life

A little over ten years ago, Janine Marsh and her husband gave up their careers in London to chase the good life in the countryside of northern France. Having overcome the obstacles of starting to renovate her dream home-an ancient, dilapidated barn-and fitting in with the peculiarities of the locals, Janine is now the go-to expat in the area for those seeking to get to grips with a very different way of life.

In this book, Janine regales us with the delights and dramas of a year attempting to live the rural idyll. Each month brings to light a new aspect of life in the French countryside: snow in January, resulting in a broken arm, which in turn leads to an etiquette lesson at the local hospital; wild winds in February; cuckoos in March; and giant hailstones in July that destroy cars and houses and bring the villagers closer together.

Told with warmth and humor, My Good Year in France showcases a uniquely French way of life: where two eternally ambitious expats drag a neglected farmhouse to life, and deal with the accompanying disasters, learn to grow vegetables, discover how to cook, and stumble across the hidden gems of this very special part of the world.

My Four Seasons in France: A Year Of The Good Life