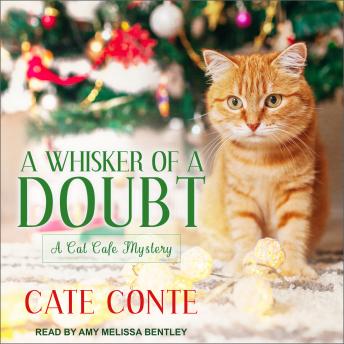 A Whisker of a Doubt

It's promising to be a picture-purrfect Christmas at New England's favorite cat cafe . . . but instead of jolly old St. Nick, residents are being visited by murder. The fourth in a mystery series from author Cate Conte, A Whisker of a Doubt is filled with felines and crime.

The holiday season on Daybreak Island is a mixed bag for Maddie James. On the one hand, her Christmas spirit is in the doghouse after a break-up. On the other, she's busy enough that she doesn't have to pretend to be merry. Business at her cat cafe is booming, and Maddie's care-taking of a feral cat colony in one of the area's wealthiest communities only helps her bottom line.

But tensions between the homeowners and animal activists are escalating to catastrophic levels . . . and before long a body is found dead in a snowbank. To prove that her accused friend is innocent of the crime, Maddie will have to prowl the island for clues to the real killer before everyone on the island goes completely hiss-terical-and more than nine lives are lost.