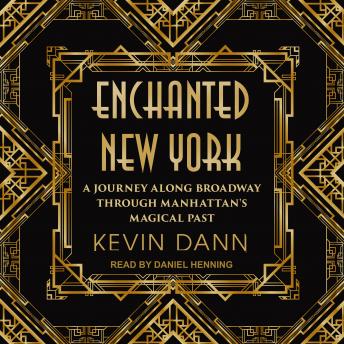 Enchanted New York: A Journey along Broadway through Manhattan's Magical Past

Enchanted New York chronicles an alternate history of this magical isle. It offers a tour along Broadway, focusing on times and places that illuminate a forgotten and sometimes hidden history of New York through site-specific stories of wizards, illuminati, fortune tellers, magicians, and more.

Progressing up New York's central thoroughfare, this guidebook to magical Manhattan offers a history you won't find in your Lonely Planet or Fodor's guide, tracing the arc of American technological alchemies-from Samuel Morse and Robert Fulton to the Manhattan Project-to Mesmeric physicians, to wonder-working Madame Blavatsky, and seers Helena Roerich and Alice Bailey. Harry Houdini appears and disappears, as the world's premier stage magician's feats of prestidigitation fade away to reveal a much more mysterious-and meaningful-marquee of magic.

Unlike old-world cities, New York has no ancient monuments to mark its magical adolescence. There is no local memory embedded in the landscape of celebrated witches, warlocks, gods, or goddesses-no myths of magical metamorphoses. As we follow Kevin Dann in geographical and chronological progression up Broadway from Battery Park to Inwood, each chapter provides a surprising picture of a city whose ever-changing fortunes have always been founded on magical activity.

Enchanted New York: A Journey along Broadway through Manhattan's Magical Past