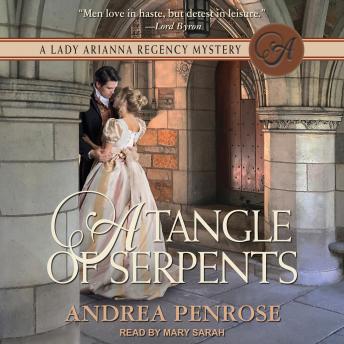 A Tangle of Serpents

With the epic victory at Waterloo behind them, Arianna and Saybrook are looking forward to a quiet summer of scholarship, far from the turmoil of war and politics. But little do they know that an even more dangerous battle is about to test their mettle.

The shocking news that Lord Grentham, the steely minister of state security, has been accused of treason and is on the run from arrest takes them and their close circle of friends by surprise. Arianna and Saybrook don't want to believe it. Despite their fraught past with the minister, they've developed a grudging friendship . . .

Or has Grentham deceived them? They're shown damning evidence that proves his guilt beyond question. And yet, their friend Sophia Kirtland refuses to accept it. Arianna can't help but have her doubts, too-even when a midnight encounter with the fugitive minister tells her otherwise. Saybrook is less certain, but his sense of honor compels him to join their quest to prove him innocent . . .

The trail leads to Paris, a city now seething with international intrigue. Rumors are rife; loyalties are for sale as the European powers scheme against each other. Can they uncoil the tangle of serpents and find the truth? The challenges turn even more dangerous when Arianna is forced to confront an old Russian enemy . . . and a sin from her father's past.