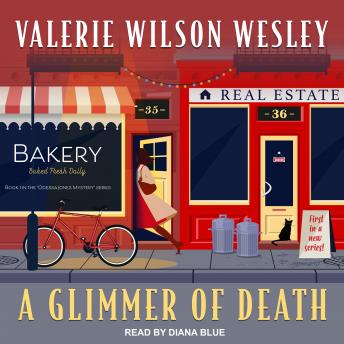 A Glimmer of Death

In the first of a thrilling new series, one woman's extraordinary psychic gift plunges her already-troubled present into chaos-and puts her future in someone's deadly sights . . .

Until now, Odessa Jones's inherited ability to read emotions and foretell danger has protected her. But second sight didn't warn her she would soon be a widow-and about to lose her home and the catering business she's worked so hard to build. The only things keeping Dessa going are her love for baking and her sometimes-mellow cat, Juniper. Unfortunately, putting her life back together means taking a gig at an all-kinds-of-shady real estate firm run by volatile owner Charlie Risko . . .

Until Charlie is brutally killed-and Dessa's bullied coworker is arrested for murder. Dessa can't be sure who's guilty. But it doesn't take a psychic to discover that everyone from Charlie's much-abused staff to his long-suffering younger wife had multiple reasons to want him dead. And as Dessa follows a trail of lies through blackmail, dead-end clues, and corruption, she needs to see the truth fast-or a killer will bury her deep down with it.