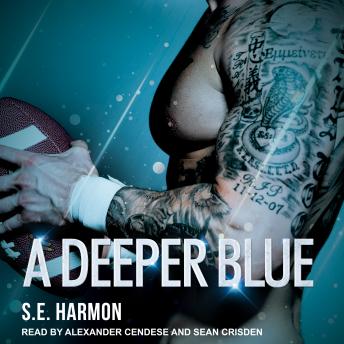 A year ago, Kelly Cannon couldn't imagine he'd end up with his formerly straight best friend. It's hard to believe he can finally kiss Blue anytime he wants . . . as long as they're in private. And there's the rub. Despite Kelly's promise to wait until Blue is ready to come out, he's tired of sneaking around. The cracks in their relationship are starting to show, and there might not be enough spackle in the world to fix them.

Britton 'Blue' Montgomery may not be the physics brainiac his boyfriend is, but he's not stupid. He knows Kelly isn't completely happy, but he's not ready to be the poster boy for bisexuals and gays in the NFL. He just wants to keep his head down, play the game he loves, and go home to the man he adores. Is that too much to ask?

With the truth slowly coming to the surface, Blue must make a choice. If it means losing Kelly, there's no decision to make. He has to find enough courage to face the music and hope they'll survive the fallout.

Man. Happily-ever-afters may not be just for Disney princesses, but they sure are a lot of work.