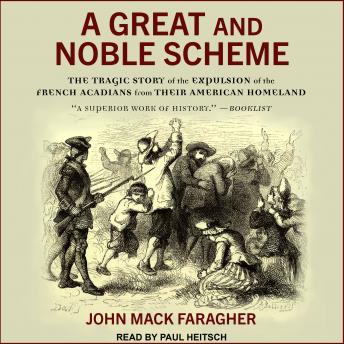 A Great and Noble Scheme: The Tragic Story of the Expulsion of the French Acadians from Their American Homeland

In 1755, New England troops embarked on a 'great and noble scheme' to expel 18,000 French-speaking Acadians ('the neutral French') from Nova Scotia, killing thousands, separating innumerable families, and driving many into forests where they waged a desperate guerrilla resistance. The right of neutrality-to live in peace from the imperial wars waged between France and England-had been one of the founding values of Acadia. Its settlers traded and intermarried freely with native Mikmaq Indians and English Protestants alike. But the Acadians' refusal to swear unconditional allegiance to the British Crown in the mid-eighteenth century gave New Englanders, who had long coveted Nova Scotia's fertile farmland, pretense enough to launch a campaign of ethnic cleansing on a massive scale. John Mack Faragher draws on original research to weave 150 years of history into a gripping narrative of both the civilization of Acadia and the British plot to destroy it.

Great and Noble Scheme: The Tragic Story of the Expulsion of the French Acadians from Their American Homeland