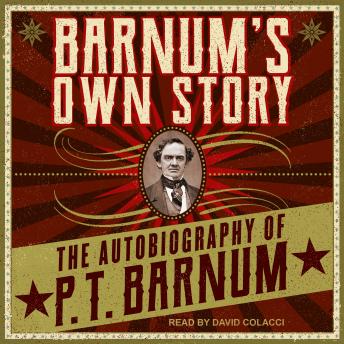 Barnum's Own Story: The Autobiography of P. T. Barnum

P. T. Barnum's career of showmanship and charlatanry was marked by a surprising undercurrent of honesty and forthrightness. His exuberant autobiography forms a happy combination of all those traits, revealing the whole story of his world-famous hoaxes and publicity stunts. Here is a pageant of nineteenth-century America's gullibility and thirst for marvels, as told by the master of revels himself.

A born storyteller, Barnum recalls his association with Tom Thumb, his audience with Queen Victoria, and his trouble keeping Jenny Lind's angelic image intact during a trying tour. He tells of Jumbo, the most famous elephant in history, from the creature's heroic arrival in America to its tragic death in a railroad accident; of his attempts to transfer Shakespeare's house and Madame Tussaud's Waxworks from England to New York; and of his triumphant reentry into public life after financial failure and five disastrous fires had all but wiped him out. The true-life tale of a man of boundless imagination and indomitable energy, Barnum's autobiography embodies the spirit of America's most exciting boom years.

Barnum's Own Story: The Autobiography of P. T. Barnum