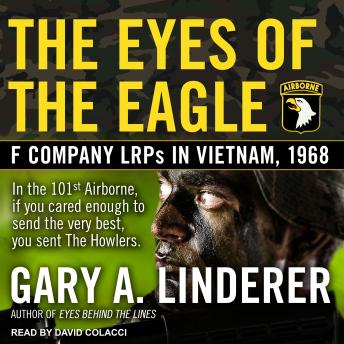 Eyes of the Eagle: F Company LRPs in Vietnam, 1968

Written By: Gary A. Linderer

In the 101st Airborne, if you cared enough to send the very best, you sent The Howlers.

Gary Linderer volunteered for the Army, then volunteered for Airborne training. When he reached Vietnam in 1968, he was assigned to the famous 'Screaming Eagles,' the 101st Airborne Division. Once there, he volunteered for training and duty with F Company 58th Inf, the Long Range Patrol company that was 'the Eyes of the Eagle.'

F Company pulled reconnaissance missions and ambushes, and Linderer recounts night insertions into enemy territory, patrols against NVA antiaircraft emplacements and rocket-launching facilities, the fragging of an unpopular company commander, and one of the bravest demonstrations of courage under fire that has ever been described. The Eyes of the Eagle is an accurate, exciting look at the recon soldier's war. There are none better.

Eyes of the Eagle: F Company LRPs in Vietnam, 1968

by Gary A. Linderer