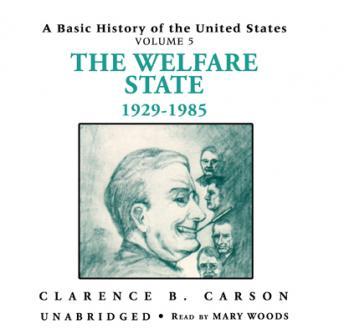 Carson’s full-scale treatment of American history combines scholarly exactness with evocative passages that lead the listener to a clearer understanding of the people and events, the triumphs and the shortcomings, which have shaped this nation. This fifth volume commences with the Great Depression and takes us to the mid-eighties. As the author of Basic Economics, Carson is well-suited to diagnose the causes of the stock market crash and the years of economic depression which followed.
Further discussions include the New Deal, the National Labor Relations Act, the start of Social Security, World War II, the Cold War, welfare in the US and abroad, black activism, the Cultural Revolution, Vietnam, the rise of the Conservative movement, Nixon and Watergate, the Carter presidency, and the beginning of the Reagan years.