A Passion for Life: The Biography of Elizabeth Taylor 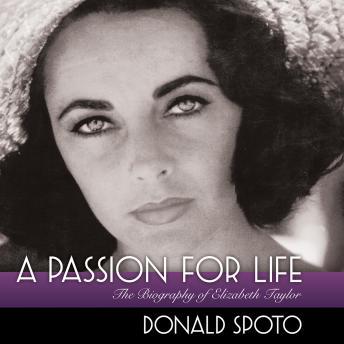 Born in England to socially ambitious parents, Elizabeth Taylor was catapulted into child stardom and molded by MGM into the great violet-eyed beauty of postwar America. Along the way, without training or counsel, she became an award-winning actress, dazzling audiences everywhere with spectacular performances.
Spoto explores the gripping story of her brutalizing six-month marriage to compulsive gambler and hotel heir Nicky Hilton, her romances with top Hollywood directors, and her marriage to the ailing Michael Wilding. Four years later, she would be swept off her feet by showman Mike Todd into an alternately violent and loving marriage that would end with Todd’s death in a plane crash, leaving Taylor a twice-divorced widow with three children at the age of twenty-six. And here are Taylor’s years with Eddie Fisher, Republican Senator John Warner, and Richard Burton, with whom she would share a hedonistic, brash lifestyle that would virtually define the 1960s’ jet set.

A Passion for Life: The Biography of Elizabeth Taylor