A Sailor's History of the U.S. Navy 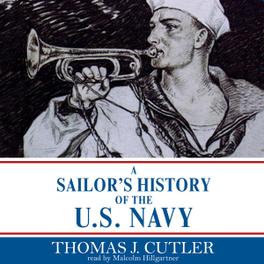 Adopted by the US Navy for issue to all new sailors, A Sailor’s History of the U.S. Navy brings to life the events that have shaped and inspired the navy of today while highlighting the roles of all sailors—from seaman to admiral. Rather than focus entirely upon such naval icons as Stephen Decatur and Chester Nimitz, as most histories do, author Thomas J. Cutler, a retired lieutenant commander, brings to the forefront the contributions of enlisted people. You’ll hear about Quartermaster Peter Williams, who steered the ironclad Monitor into history, and Hospital Corpsman Tayinikia Campbell, who saved lives in USS Cole after she was struck by terrorists in Yemen.
Unlike most histories, A Sailor’s History is arranged thematically rather than chronologically. Chapters are built around the navy’s core values of honor, courage, and commitment, its traditions of “Don’t Tread on Me” and “Don’t Give Up the Ship,” and other significant aspects of the navy.
As Cutler states in his preface, the book is not a whitewash. He includes mistakes and defeats along with the achievements and victories as he draws a portrait of a navy growing stronger and smarter while turning tragedy into triumph. The result is a unique account that captures the navy’s heritage as much as its history and provides inspiration as well as information while emphasizing that most essential element of naval history: the Sailor.

A Sailor's History of the U.S. Navy