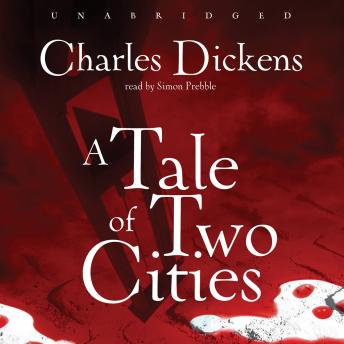 Set against the backdrop of the French Revolution, A Tale of Two Cities is a sprawling tale of London and revolutionary Paris with a complex plot portraying the results of terror and treason, love and supreme sacrifice.
“It was the best of times, it was the worst of times.”—opening line of A Tale of Two Cities
It was the time of the French Revolution, a time of great change and great danger. It was a time when injustice was met by a lust for vengeance, and rarely was a distinction made between the innocent and the guilty. Against this tumultuous historical backdrop, Dickens’ dramatic story of adventure and courage unfolds.
Unjustly imprisoned for eighteen years in the Bastille, Dr. Alexandre Manette is reunited with his daughter, the gentle Lucie Manette, and safely transported from France to England. It would seem that they could now take up the threads of their lives in peace. As fate would have it, however, the two are summoned to the Old Bailey to testify against a young Frenchman, Charles Darnay, falsely accused of treason. Strangely enough, Darnay bears an uncanny resemblance to another man in the courtroom: Sydney Carton, a dissolute barrister. It is a coincidence that saves Darnay from certain doom more than once, as the two men’s fates become intertwined with that of the Revolution.
And there is Madame Defarge, a female revolutionary who has an implacable grudge against the aristocratic Evrémonde dynasty and who knits as she watches the beheadings.
The storming of the Bastille, the death carts with their doomed human cargo, the swift drop of the blade of La Guillotine—this is the French Revolution that Charles Dickens vividly captures. Brilliantly plotted, the novel is rich in drama, romance, and heroics that culminate in a daring prison escape in the shadow of the guillotine.