A Wild Ride through the Night 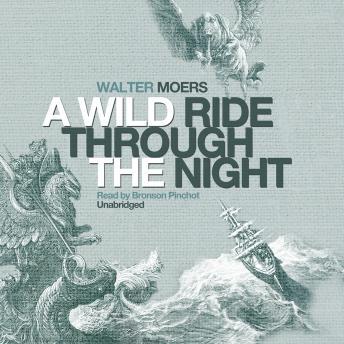 In the wake of the breakout successes of Walter Moers’ 13½ Lives of Captain Bluebear, Rumo & His Miraculous Adventures, andThe City of Dreaming Books, Moers is back with this fourth book, the tumultuous tale of a little boy and his encounter with Death. Moers bases his utterly delightful story on twenty-one woodcuts by the inimitable Gustave Doré, the most successful illustrator of the nineteenth century.
In a world between legend and dream, A Wild Ride through the Night describes the exhilarating and comic adventures of twelve-year-old Gustave, a boy who aspires to one day be a great artist. When a disaster at sea puts Gustave in the uncompromising hands of Death, he has the choice to give up the ghost or take on a series of six impossible tasks. Gustave embarks on a strange and perilous journey during which he must save a princess from an angry dragon, pull a tooth from the Most Monstrous of All Monsters, fly over the moon, and even, somehow, meet his own self. Will Gustave’s creativity and imagination be able to save him from his fate?

A Wild Ride through the Night