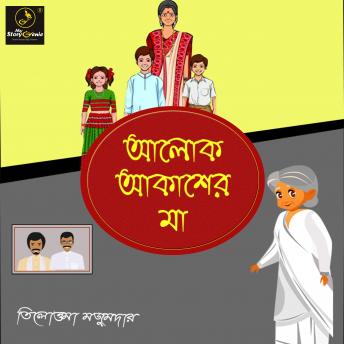 'Aalok' and 'Akash' – the idealist sons of 'Dr. Anadarup' and 'Ms Bani', got consumed in the fire of student agitation centered around the Utopian ideals of the 'Naxal Uprising', that was aimed at 'Capitalist Exploitation of Resource' and the associated 'Income Divide' of the early 70's. Two brilliant and sensitive young minds that cared about the impoverished and the marginalized, atypical of the movement, were lost to the nation leaving their parents in a time loop of memories. The parents never came around to reconcile to the fact that selfless championing of cause-driven ideologies would exact such a heavy price by the 'Incumbent Dispensation' on the afflicted individuals while the world around would be non-nonchalantly moving on without battling an eye-lid while generally benefiting from the emergence of better order post the systemic cleansing. Dr Anandarup became a recluse within few years and died impoverished leaving behind his wife – Bani and his daughter 'Averi' in a state of penury.

Averi grew up as any other normal child, with practical materialistic considerations and self aspirations like the rest of her generation, in complete contrast to her brothers' ideologies that she felt were misplaced, Dystopian and hopelessly idealistic. She got married, started her own family and she also started rallying around her mother to help her getting over her self consuming vortex of grief by constantly coaxing her to forget about her idealist sons. Averi unabashedly maintained that her brothers were irresponsible and misguided lose canons in today’s self obsessed parlance.

Will the legacy of the idealists' become irrelevant in this new age of self indulgent society, or will these forgotten chapters from history continue to infuse inspiration to many more such uprisings throughout the time space continuum?? Tune in to the thought provoking soulful audio narrative on social order through passage of time from 'MyStoryGenie' Bengali Audiobooks.