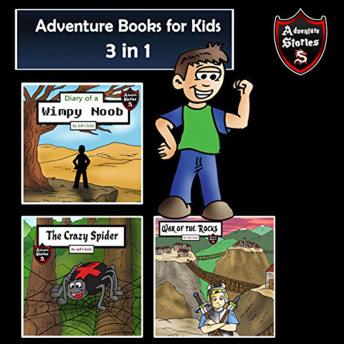 Story 1: Noob is awkward; he is weird. Everybody has always known it, but few have sympathized with his alternative brain. Even after fighting and killing a dangerous sea creature, he doesn’t get acknowledged by the crowd. But will they finally see his potential after he proves himself to be a skillful competitor as a businessperson? Will he turn his life around with his active mind-set? Learn more and read about Noob, a genius in disguise.

Story 2: Speter is a spider who hates the rain, but in the tropical climate you have to create a good web in order for it to be durable. Salem is a little confused when his web breaks. Should he go hunting without webs? Should he attack the humans? Or should he just join a group of spiders? Find out what this spider decides after being confronted with a robot, an aggressive villager, and a fellow spider who shows him the way.

Story 3: Borco and his family are in the middle of a conflict. The town of Mendy Mountain is a strange one, divided by rocks, held together by huge bridges. But when one of the corrupt magistrates finds a way to summon evil ghasts and shoot fireballs at the other civilians, revolution is bound to happen, and the brave citizens of Mendy Mountain are ready to strike back. Listen to this exciting, action-packed adventure of a real hero whose only objective is to restore the peace.

This title is due for release on November 15, 2017
We'll send you an email as soon as it is available!