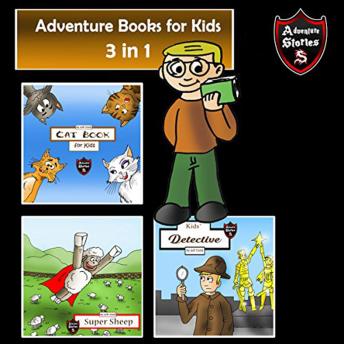 Adventure Books for Kids Fantastic Stories for All Kids

Three stories in one bundle.

Story One: When Casper's cat girlfriend becomes a little more demanding than she was at first, he starts having doubts, but when she sends him on a dangerous mission, he really doesn’t know anymore. This story involves explosive monsters, strange objects, and a bunch of cats trying to argue over what’s best to do. The alley cats in this story are friends, but one of them is constantly lying. Find out who!

Story Two: This story is about a super sheep. His name is Martin, and he is different than the others - he has the ability to fly and rescues other sheep in danger. But after saving the lives of his fellow sheep one-by-one, he faces an unexpected threat, a possible calamity which requires him to come up with creative solutions and use his super strength. Find out more about Martin, a flying sheep with great courage and determination.

Story Three: Garso and Marthus are two detectives. And although Garso hasn’t solved a lot of significant cases, his biggest task is now to solve the case of the vanished city statue. They both go on a search and find out clues along the way, but the real reason for and method of making the magnificent monument disappear will surprise them both. The case takes them to a distant land and forces them to put themselves in the line of danger.

Adventure Books for Kids Fantastic Stories for All Kids