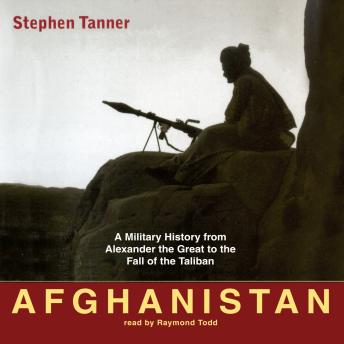 Afghanistan: A Military History from Alexander the Great to the Fall of the Taliban

For over 2,500 years, the forbidding territory of Afghanistan has served as a vital crossroads not only for armies but also for clashes between civilizations. As the United States engages in armed conflict with the Afghan regime, an understanding of the military history of that blood-soaked land has become essential to every American.

Alexander the Great conquered Afghanistan on his way to India. Later, because of its strategic location with the Silk Road passing through it, Afghanistan was invaded by Arabs, Mongols, and Tartars. Great Britain tried—and failed—to add Afghanistan to its Indian empire, while Russia tried to expand into the same embattled land. Afghanistan once again fought and defeated a secular government in the face of rising Islamic resistance. Now, America faces a new enemy on this land that has become, over the centuries, the graveyard of empires past.

It is hard to write a truly interesting, smoothly flowing history of someplace, probably because history doesn't flow smoothly. This book does a creditable job of outlining the history of a poorly understood area of the world, one that we do need to understand better. One comes away from this book with a better perspective & some hope for the future of these troubled people. Unfortunately the narrator is not quite up to the quality of writing. Oddly, while he doesn't stumble over most of the Afghan names, he does mispronounce a number of English words. He also has a frustrating habit of reading phrases as whole sentences which makes it hard to follow at times. As an introductory outline to the country's history and main players, this book serves its purpose.