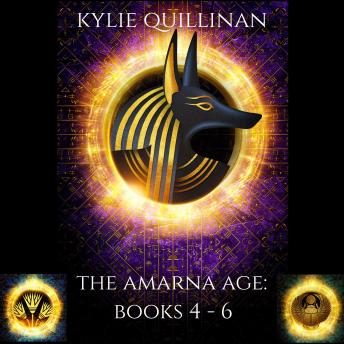 #2 of The Amarna Age Collections

This collection contains the final three books of The Amarna Age series.

Gates of Anubis: The Eye of Horus is almost within Ankhesenamun's grasp. But when she reaches her destination, what awaits her is nothing like she had expected.

Lady of the Two Lands: Ankhesenamun finally has the Eye of Horus, although she has given up almost everything to secure it. But she underestimates the power of the Eye.

Guardian of the Underworld: Having released Egypt from Ay’s clutches, Ankhesenamun returns to Crete to try to retrieve Intef from the underworld. But a deal struck with a god, even a minor one like a gate guardian, cannot easily be undone.

Blending history and fantasy, The Amarna Age series is set in 18th Dynasty Egypt where the old gods have been worshipped for thousands of years and magic is a matter of belief. For readers of historical fantasy who enjoy magical realism and an ancient world setting.

This title is due for release on September 17, 2022
We'll send you an email as soon as it is available!