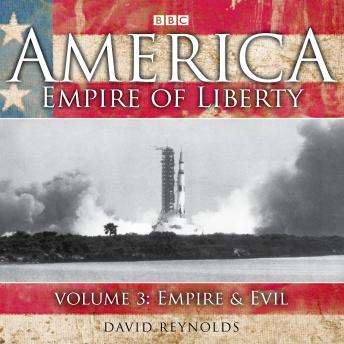 This epic narrative tells the saga of the United States through the voices of those who lived it, exploring three abiding national themes: empire, liberty and faith. Empire & Evil, the final series of thirty episodes, chronicles America’s long struggle with the Soviet Union through the Cuban missile crisis to the collapse of what Ronald Reagan dubbed the ‘evil empire’ and examines the corrosive effect of that confrontation on American values, particularly in Vietnam and Watergate. The country also struggled to overcome the evils of its own racist past, from the Civil Rights Movement to the election of its first black president. Woven into the tapestry are vivid threads from ordinary life, such as the impact of Elvis on popular music, the battle over abortion and the story of the personal computer and the information revolution. 'Reynolds's presentation combines enthusiasm with authority, and his insightful and far-ranging text is augmented by a wealth of archive voices, from speeches to people in the street' - The Oldie. 'Reynolds's vigorous presentation of his sweep of American history, and the interwoven voices and news reports of the time, make for striking immediacy' - Observer.