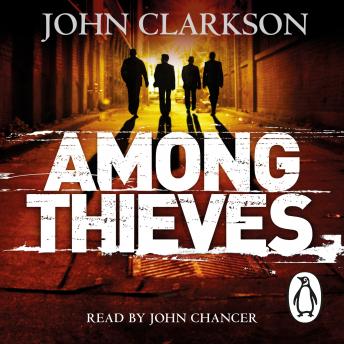 Like Ocean's Eleven meets Mystic River, Among Thieves is a high-octane thriller from a writer at the top of his game.

'Hardboiled urban noir from the pen of a master' Lee Child

Unfairly imprisoned by the State of New York, ex-con James Beck is a man with a keen sense of right and wrong. But when a friend's niece turns to him for help, he soon discovers that the men at whose hands she's suffered are more dangerous than he could possibly have imagined.

In order to prevail, he and his gang of friends will have to outwit, out-flank and out-fight a formidable array of opponents the like of which they've never before encountered. Or die trying . . .

'The legendary Jack Reacher may just have met his match in ex-convict James Beck, star of this sensational thriller ... The action is relentless, twist turns upon twist as the intricacies of an exceptional plot unfold, revealing Beck as a man never to be underestimated. This is an outstanding thriller from a writer at the top of his game' Daily Mail

'An adrenalin fuelled rush. James Beck is one of the baddest, boldest, brashest creations ever seen in the pages of any thriller. You can't ask for more out of a crime novel, Among Thieves is as good as it gets' Lorenzo Carcaterra, author of Sleepers

'An outstanding thriller ... for fans of' Publishers Weekly

'John Clarkson's Among Thieves is an intense, well-written thriller about tough, cunning men whose conflicting schemes turn Brooklyn into a battlefield' Thomas Perry

'Fans of the great Lawrence Block and Lee Child will get their money's worth and then some' Peter Blauner, author of Slow Motion Riot and Slipping into Darkness

'Among Thieves is fabulous, pure and simple' Book Reporter

This book is not that obvious like so many books of this genre. It is fast paced and action packed, I recommend you to listen to it/ Jenny