And Party Every Day: The Inside Story of Casablanca Record 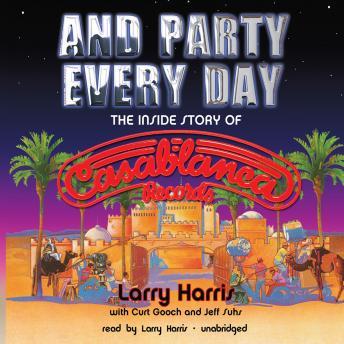 Now it can be told! The true, behind-the-scenes story of Casablanca Records, from an eyewitness to the excess and insanity. Casablanca was not a product of the 1970s, it was the 1970s. From 1974 to 1980, the landscape of American culture was a banquet of hedonism and self-indulgence, and no person or company in that era was more emblematic of the times than Casablanca Records and its magnetic founder, Neil Bogart. From his daring first signing of Kiss, through the discovery and superstardom of Donna Summer, Village People, and funk master George Clinton and his circus of freaks—Parliament-Funkadelic—to the descent into the manic world of disco, this book charts Bogart's meteoric success and eventual collapse under the weight of uncontrolled ego and hype. It is a compelling tale of ambition, greed, excess, and some of the era's biggest music acts.

"The book contains detailed evidence of the chaotic manipulation of the music charts in the wild days before computer scanning. This fell mostly under Harris' purview, and he offers fascinating insight on what these legendary 'promo men' did back in the day."—L.A. Weekly

And Party Every Day: The Inside Story of Casablanca Record