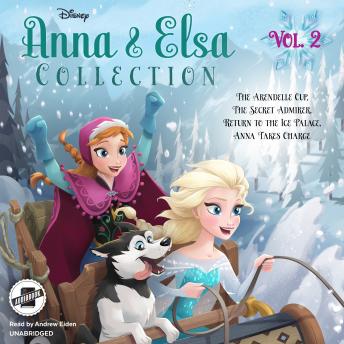 Princess Anna, Queen Elsa, Olaf the snowman, and all the stars from Disney's Frozen are back in a magical series perfect for children ages six to nine. This four-book boxed set is the ultimate gift for any Frozen fan.
Anna & Elsa #6: The Arendelle Cup
It's time for the Arendelle Cup-an annual 150-mile sleigh race. People come from far and wide to compete, and this year, to celebrate the castle gates finally being open, Anna and Elsa are going to represent Arendelle themselves!
Anna & Elsa #7: The Secret Admirer
When strange gifts and notes begin arriving at the castle, it seems that Elsa might have a secret admirer somewhere in Arendelle. Olaf is thrilled! He loves "love." But Anna and Elsa want to find out who the admirer is. The search is on!
Anna & Elsa #8: Return to the Ice Palace
Anna and Elsa are hosting very important guests-and what better way to impress than to show them the beautiful ice palace Elsa created high in the mountains? But their visitors get a big surprise when the ice palace is taken over by Elsa's tiny snowgies!
Anna & Elsa #9: Anna Takes Charge
When Elsa has to leave Arendelle for a day, Anna is left in charge!