Another Case Of Milton Jones The Complete: Series 3 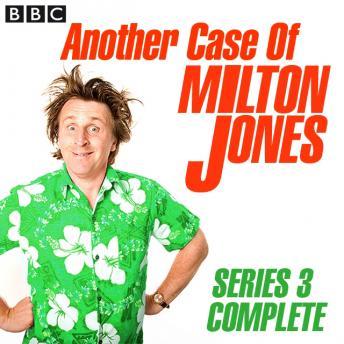 Milton Jones returns for a third series in which he gets to become a complete and utter expert at various different and unrelated things. In these four episodes, he's a Fashion Photographer, Antiques Expert, Magician and Health Food Guru - and in each episode, with absolutely no ability or competence, he plunges into a furiously funny and fast-paced adventure with utterly hilarious results. In Episode One, Milton is a world-famous photographer who travels from the catwalks of Milan to the jungles of Bolivia to find the perfect picture of a calendar. Next up, in Episode Two he’s a collector and antiques expert whose passion for Fabergé eggs leads him to bankruptcy, a Russian sleigh ride and a mysterious Swiss Schloss. Or should that be Schwiss Sloss? In Episode Three, our wayward hero has become an internationally-renowned magician and illusionist who gets tangled up in a devilish plot to make the Bank of England disappear. And finally, in Episode Four he’s a health and diet guru who plans to take over the world by means of a Walnutshell and Nettle face scrub. The man they call 'Britain’s funniest Milton', Milton Jones stars in this smash hit BBC Radio 4 comedy show, with Tom Goodman-Hill (The Office, Spamalot).

Another Case Of Milton Jones The Complete: Series 3