Another Case Of Milton Jones The Complete: Series 5 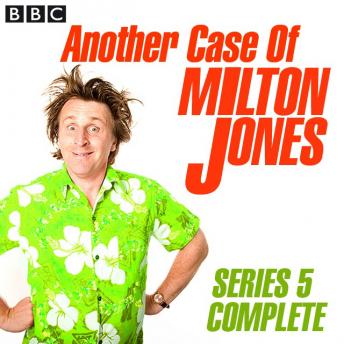 In this fifh series, Milton Jones gets another opportunity to be a complete and utter expert at something, and these six episodes see him taking on the roles of Astronomer, Diplomat, Undercover Journalist, Celebrity Gardener, Royal Speech Therapist or Lorry Driver. In each episode, with absolutely no ability or competence, he plunges into a furiously funny and fast-paced adventure with utterly hilarious results. In Episode One, move over Brian Cox, because Milton Jones is now a world-famous astronomer and seeker after scientific truth and accuracy. Typical Sagittarian. Episode Two and Milton is an International Diplomat who is on the run after leaking all the UN’s emails - except for the Swiss ones, which were far too dull. In Episode Three, he crosses stamens with a deadly rival in the vicious cutthroat world of gardening, and in Episode Four, in a little tribute to a well-known film, Milton becomes the Royal Speech Therapist. And so he helps a Prince find his voice and a King find his pomegranates. After that comes Episode Five, where Milton Jones is the king of the world of refrigerated haulage with his very own fleet of iced lorries, and has to face a bitter rival more deadly than one of his mum's transport caff's all-day breakfasts. And in the final episode, Milton becomes Britain’s best-known undercover journalist. Which means that Milton also becomes Britain’s most least-effective undercover journalist. The man they call 'Britain’s funniest Milton' stars in his Sony Award-winning show, co-starring Tom Goodman-Hill (Ideal), Lucy Montgomery (Down The Line), Margaret Cabourn-Smith (Miranda), Ben Willbond (Horrible Histories), Dan Tetsell (Mongrels) and Dave Lamb (the voice of Come Dine With Me.)

Another Case Of Milton Jones The Complete: Series 5